The dog is your best trainer! 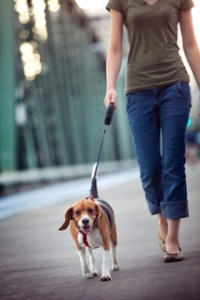 According to a statement by WHO, the World Health Organization, humanity is gaining weight! different offenders are singled out as much junk food or lack of exercise. Admittedly, the development of transport, the hectic pace of life of citizens and the development of the regime pill industry were gradually due to the lack of motivation that remained to some. A recent study conducted by the University of San Diego (USA) could reconcile with physical activity. It would be enough to walk his dog to keep fit!.

The survey of 984 owners of medium-sized dogs (approximately 23 kg) divided into 2 groups: those who walked their dog at least 10 minutes during the past week and those who have not walked their dog least 10 minutes. Note that a third of the panel was part of the second category. The results showed that those who regularly walked their dogs had followed for 64.3% of them, the recommendations of the American guide to physical health, the equivalent of the “eat, move” from the Ministry of Health France. This particular U.S. program recommends performing at least 30 minutes of physical activity five times a week. They have therefore joined the business with pleasure while walking their pet.

This tends to show that this study is the motivation to do exercise regularly. Owning a dog, at least for those living in the city, involves regular outputs if only to allow the dog to do his business. Why not take advantage of this event to make the exercise as much as 30 minutes to turn in his neighborhood in search of a green space, it goes fast!

However, not everything that depends on the owner of the dog, the motivation and behavior of the animal also appear to be key factors for the walk. According to the study from the University of San Diego, dog owners are more likely to take long walks with dogs who request. This is the case for dogs medium to large who need to spend. In addition, a dog who will conduct “disciplined” for the output is more likely to convince his master to take the ride, especially on weekdays.

The dog fits most of the time to his master and his habits, but the choice of the race it is important that there is no frustration on both sides. Too energetic dog will not settle down 5 floors to their needs at the bottom of the building, it will be appreciated, however, a good walk around the block. This time is often perceived by the animal as a time of complicity and a large walk often helps to bring the master of his dog.

If we look closer, everyone wins. You exercise without realizing it and your dog takes the air.