Your Dog is Half Happy and Half Unhappy? 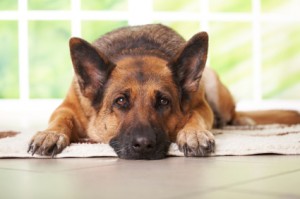 If your dog destroys the furniture when you are away,  it could well be that pessimistic, according to a recent study by scientists.

A recent study has shown that some dogs were more willing to sluggish than others. Thus, some are naturally optimistic and others pessimistic behaviors comparable to those of humans.

“We know that people’s emotional state affects their judgment and that happy people are more likely to judge an ambiguous situation positively,” said Professor Mike Mendl, one of the authors of the study conducted at the University Bristol. “What our study has shown is that this applies also to the dogs.”

To measure canine psychology, researchers trained dogs to recognize and bowls of food placed in a corner of the room bowls arranged in another corner of the same room containing nothing. They then placed these bowls places “neutral” between the two corners where they were originally placed.
Just as happy people tend to see the positive in any situation, the optimists dogs rushed to the bowls to find food while others, pessimistic, have done the same but less playful thinking find bowls empty without fail.

The study, published in the journal Current Biology, which included 24 dogs in two animal centers in the UK, found a correlation between temperament and behavior of dogs including when they are separated from their owners .

Dogs who saw the bowl half full tended to be calmer when they were left alone, convinced that their owner would. In contrast, pessimistic dogs were more anxious, barking and behaved badly sometimes.
About half of the 10 million dogs account the UK suffer from disorders related to separation according to Professor Mendl.

Most of abandoned pets including dogs due to behavior problems. Pet owners do not realize that they may suffer from emotional problems such as anxiety.