5 Ways of Recognizing the Signs of Early Dementia

Nobody likes being told that a close relative, particularly a mother or father, suffers from Dementia. It is one of the worst mental illnesses suffered by the elderly and can strip a person down to their barest essentials. However, if you have the news earlier rather than later, there is something more you can do to help your precious loved one.

Learning to recognise the signs of early Dementia is essential, as it helps to give you early warning of what may be to come. Read on for 5 ways in which you can start to recognise the early onset of Dementia so that you can be prepared for it when it does start to affect you and your family. 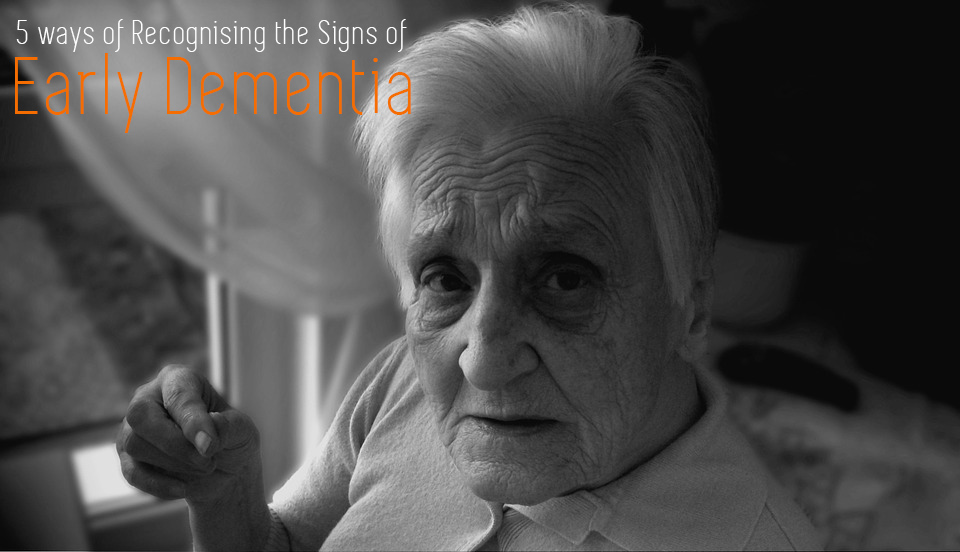 This is one of the clearest signs of early Dementia. Some personality and mood swings are to be expected when you get older and grumpier and your limbs don’t quite work as you want them to. However if you are noticing vastly different mood changes in your relative, you need to seek help. A drastic change in personality could be an early onset of Dementia or Alzheimer’s, so it is better off to get them diagnosed sooner rather than later. These personality changes vary massively, so even if it is small, but fundamental change – such as suddenly hating broccoli when all these years it was a family favourite – get it checked out! You’ll be glad you did!

They walk into a room and forget their purpose there. Or they take a trip to the shops and forget their purse or their coat. Some bouts of forgetfulness are relatively harmless but others are not so. If one of your relatives is diabetic for example, and they leave town without their insulin, this could be dangerous. Forgetfulness is a clear sign of Dementia, particularly for otherwise important items or items that were previously very precious to the individual.

Your relative may have trouble following a simple story you tell, or they may recall an event vastly different from the way in which you recall it. Memory lose and the blending together of different memories are quite common in Dementia sufferers. Part of it is due to age, but if your relative has strong opinions about a memory or a story that you know to be incorrect, warning bells should be ringing.

Also, if they have difficulty reading long passages or following written instructions, this could also be an early warning. There is not much need for elderly relatives to follow written instructions, but if you are worried that a close relative may have Dementia, this might be a good test. However, if you are unsure you should always speak to a professional as they will be able to allay any fears you may have. Alternatively, they can also point you in the right direction towards a professional who can properly help you.

Perhaps they have mowed the lawn every Tuesday for the last five years. Perhaps they are incredibly skilled at making an omelette. Simple tasks made professional over time can sometimes now be difficult for Dementia sufferers. If your relative suddenly finds difficulty in doing a task they would normally find easy, this could be a sign of early Dementia. Dementia and Alzheimer’s attacks the memory in the mind, so they may have trouble recalling how a certain task is performed. It could be a lapse in judgement or it could be a sign of something more serious.

Your relative may find themselves repeating words, phrases or even questions that they had asked just moments prior. Sometimes it can be that their mind was focused on something else and they did not hear your answer, but if they appear confused when asking questions, think twice before you answer. This may be a sign of Dementia. Adults with Dementia will often feel confused at a person or situation and will ask repetitive questions as if stuck in a time loop. Simply repeat your answer, reminding your relative that they have asked that question once already. This may help them to jog their memory.

It is important to remember that one or two of these signs does not immediately mean that your elderly relative suffers from Dementia. Everyone has a lapse in memory from time to time and repetition can just be a sign of poor concentration or a focus on another task at hand. If you keep seeing these signs, however, and are concerned that therein lies a bigger problem, it is a good idea to consult a professional. The sooner you recognise illnesses such as Alzheimer’s and Dementia, the sooner they can be addressed and your relative cared for accordingly. While they are untreatable illnesses, you can still take every effort to make sure your relative is well looked after and happy for the rest of their life.

Article provided by Mike James, an independent content writer working together with Chichester based personal injury and brain injury lawyer George Ide LLP, who were consulted over the information in this post.