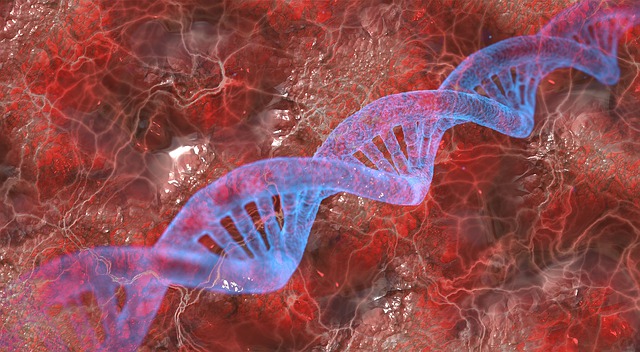 The central dogma of molecular biology describes the flow of information from DNA transcription to RNA translation to making functional proteins. Through interactions with each other, some of these proteins are critical in many activities in the nucleus such as DNA methylation, acetylation, DNA packaging, replication, and repair. Errors in these can have adverse consequences. Mutations in DNA sites can disrupt the way proteins interact with key DNA regions leading to many serious consequences such as disruption of replication which can have a knock-on effect on DNA repair, meiosis, and the entire cell cycle. It is for this reason that safeguarding the DNA forms a large part of nuclear activities. A dedicated field of genetics called epigenetics focuses on studying mechanisms that are not part of the DNA itself but affect the behavior of DNA. A collection of molecules and compounds tasked with DNA modification form part of the epigenome. More specifically, the epigenome consists of mechanisms responsible for activities such as covalent modification of DNA and histones, DNA packaging around the nucleosome, complex chromatin interactions (Lanzuolo and Orlando, 2007).

The epigenome plays a key role in DNA repair such as fixing mutations in DNA before DNA replication to ensure the mutation is contained. Advanced tools such as ChIP-seq (chromatin immuno-precipitation) and CRISPR-Cas9 (Clustered regularly interspaced short palindromic repeat (CRISPR) and associated protein, Cas9) are now available to equip researchers with capabilities to more accurately understand the basis of cellular mechanisms that govern the control of DNA expression, replication and damage; and precisely edit the genome to fix mutations (Doudna and Charpentier, 2014; Nakato and Shirahige, 2017). ChIP-seq provides an advantage over the traditional ChIP in that it integrates with chromatin immuno-precipitation with the massive parallel and high throughput sequencing technologies (Park, 2009).

DNA polymerases play an important role in facilitating DNA replication, recombination, and repair (Burgers, 1998; Muzi-Falconi et al., 2002). In eukaryotes, the repair of mismatches (mismatch repair; MMR), specifically, is a complex process that involves a slew of proteins interacting in order to detect and repair the error. MMR has been shown to be controlled by a wide range of proteins such as Exonuclease 1, replication factor C (RFC), DNA polymerase δ and MutS-related proteins (Tsurimoto and Stillman, 1991; Dornreiter et al., 1992; Yuzhakov, et al. 1992; Kolodner and Marsischky 1999; Henninger and Pursell, 2014).  Kolodner and Marsischky (1999) showed that MMR needed heterodimer complexes, MSH2–MSH3 (MutSβ) and MSH2–MSH6 (MutSα). They found that MSH2–MSH3 could repair two or more unpaired bases, while MSH2–MSH6 could fix base mispairs, insertion/deleting mispairs of up to 12 bases. Recent studies, such as the ChIP-seq analysis study by Huang et al. (2018) have demonstrated that the interaction of the MH6 subunit with the histone mark, H3K36me3, in MMR prioritizes the protection of exons.

The p53 protein plays a critical role in DNA repair, cell cycle checkpoint and apoptosis (Fridman and Lowe, 2003). This protein, when present in elevated levels in response to stress leads to downstream protein stabilization and activation through post-translational modifications (Bakhanashvili et al., 2008). When a cell is damaged beyond repair, p53 initiates cell-cycle arrest and apoptosis by activating the target genes responsible for the synthesis of apoptotic proteins (Prives and Hall, 1999). p53 has also been found to serve a DNA repair function in the mitochondrion (Bakhanashvili et al., 2008). Here, p53 may be linked with the recruitment of repair proteins in response to damage in liver and cancer cells, thus maintaining the integrity of mitochondrial DNA (de Souza-Pinto et al., 2004; Chen et al., 2006; Bakhanashvili et al., 2008). Bakhanashvili et al. (2008) reasoned that mitochondrial p53 activity lowers mutation accumulation in the mitochondria by detecting and then repairing a 3’-terminal exposed (left behind by a dissociated polymerase) due to mispairing. Recently, ChIP-seq analyses of p53 activity led to the identification of enhancer RNAs (eRNAs) involvement in p53 guided cell cycle arrest (Melo et al., 2013).

The overall processes underlying the safeguarding of DNA integrity have been fairly well studied. However, there is still a widely recognized need to understand the precise activity of each player in order to develop more precise treatments for many of the downstream consequences associated with mutations in key regions of DNA. CRISPR-Cas9 and ChIP-seq analysis coupled with other next-generation sequencing analysis provide incredible tools and opportunities to better understand the genome, epigenome and the processes involved in many serious non-communicable diseases. Click here to learn more about readily available ChIP-seq analysis resources.

Ximena Rodriguez is a seasoned writer who has over the years contributed quality content on various high-profile websites. She has particularly excelled in niches like Healthcare, Technology, Education, etc. Her professionalism, four year’s experience, and expertise make her one of the most sought-after content writers in the field.