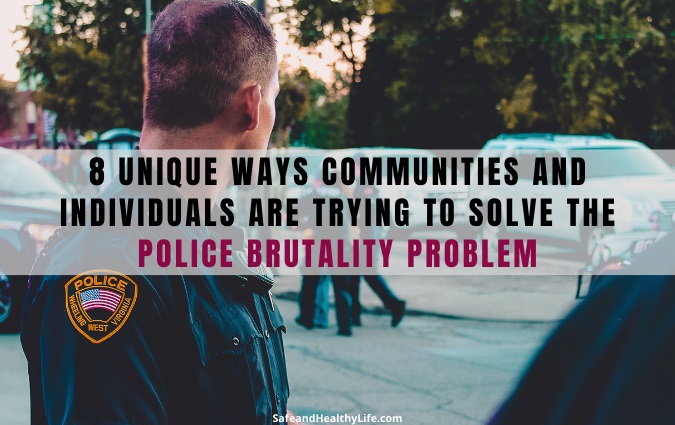 The problem of police brutality, especially against people of color, continues to be one of the top issues the nation is facing today.

While some pro-police groups have fought back against any changes to the current system, a vast majority of Americans recognize that police reform is badly needed in this country.

Luckily, there are several organizations and many dedicated individuals coming up with answers to this problem. Here are solutions that make the most sense and may redefine the police’s community role.

One of the most important ways to help curb police brutality and change the way force is used in law enforcement is to identify it. Data is a powerful tool in the fight against police misconduct and brutality.

Unfortunately, there is no comprehensive data system from the federal government tracking police brutality and killings. There are a few independent clearinghouses of data tracking fatal shootings around the country and other sources of information that keep records of local incidents.

These data sources are valuable tools to spot trends in police brutality and how it impacts communities of color.

2. Investing in Other Supports

Police brutality can also be less of a problem if communities start investing in more alternative programs. In most towns and cities, the police are called for nearly any emergency situation or crisis.

Fatal force sometimes is a result of a situation with a mentally ill person. Instead of using the police for mental health crises, communities are moving towards social services crisis intervention teams.

Using social workers to respond to these types of emergencies may have better outcomes and reduce police violence.

Over the past two decades, many police forces have amped up their ability to respond to mass shootings and other intense situations.

Police organizations around the country have received an incredible amount of supplies that are similar to military operations. Some forces now have access to a variety of tactical gear, such as high-powered machine guns, grenade launchers, military vehicles, and body armor.

There is a connection between increased levels of militarization in the police force and the number of fatal incidents. Police violence increases in cases of more militarization.

It’s also vital for communities to adopt new legislation that focuses on offering more protections to citizens and fewer protections to the most violent police officers.

In many cities and towns around the nation, police officers enjoy strong protections from their unions. Legislation needs to be passed that still offers protection to police officers so they can do their jobs safely, but provide accountability so that police brutality is taken seriously.

Lawmakers must work together with city leaders and police union heads to ensure that violent individuals aren’t serving on police forces.

Violent police incidents can also be combatted and prevented with more support to groups promoting civil rights, such as the ACLU.

More people can help by donating to causes that raise funds for these groups, such as Ashley Longshore and her work raising money through her art.

By raising funds and donating proceeds to various civil rights groups, people can do their part to get their voices heard and help their communities change.

The police culture in the United States is another big culprit for a large number of violent and fatal encounters between police officers and people of color.

Changing the culture is a huge undertaking and it requires commitment from city leaders and police departments. Police forces need to invest in new training programs that focus more on community support and less on lethal force and military tactics.

They also need to provide more opportunities in learning how to de-escalate situations before they get violent. Police forces should also offer racial bias training to help individual officers recognize negative mindsets.

Another important step in solving the police crisis is to equip individual officers with body cams. Police forces with comprehensive body cam usage have more accountability and transparency.

If a fatal incident happens, a body cam is there to document the situation and give a neutral account of exactly what happened.

The last way to help solve this issue is to work on reorganizing how police departments are supervised and investigated. It’s common for police to investigate their own departments where there are suggestions of misconduct or violent encounters.

It may be better for fatal police incidents to be handled by an independent agency so that there is a higher chance of a fairer outcome and accountability.

Reducing the number of fatal incidents with police requires several different changes to the way police departments train and operate.

Together, with their communities and city leaders, police departments can redefine their roles and work with the people in their neighborhoods to help support them and keep everyone safer.

Steve Barker is an independent blogger and content writer. He is a pharmacist and nutritionist by profession. He has a vast knowledge of the healthcare field. He loves to share his thoughts with his informative pieces and connect with the audiences.