How Do Environmental Toxins Affect Your Health? 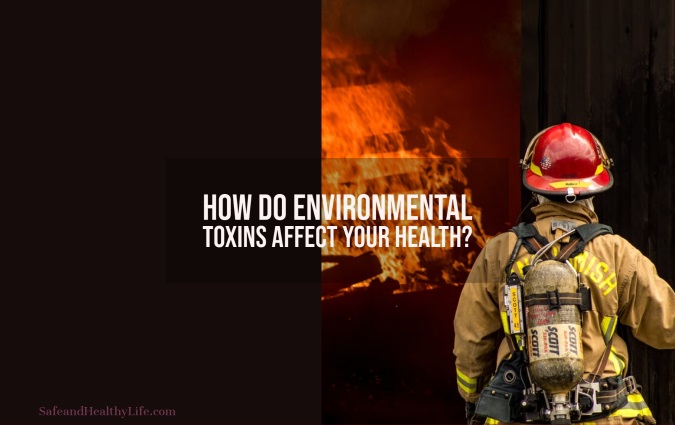 We are exposed to toxins more often and consistently than we might realize, and that exposure can have serious effects on our health.

There are situations where toxin exposure comes from your occupation. For example, firefighters, military members, people who work in oil or gas, and airport personnel are exposed to something called Aqueous Film-Forming Foam or AFFF.

AFFF is used to extinguish liquid-based fires, and it can be dangerous to humans and is considered carcinogenic.

Even if you don’t work in a high-risk occupation, you may be regularly exposed to environmental toxins, and the following are things to know.

What Are Environmental Toxins?

Human-made chemicals that are environmental toxins include:

General effects and health conditions that are linked to environmental toxins include:

Lead toxicity is perhaps one most of us are familiar with.

Endocrine disruptors are natural and human-made substances that interfere with your cell signaling and hormone systems, producing potentially harmful effects developmentally, on the reproductive system, neurologically, and on the immune system.

Endocrine disruptors tend to act like estrogen, and they are found in products such as:

There’s one compound, in particular, BPA, that may be most risky.

If you’re pregnant or breastfeeding you should be especially aware of potential endocrine disruptors.

As was touched on, BPA is one of the most concerning but also prevalent endocrine disruptors. It’s used in a great deal of packaging for food and drinks, and it’s in baby and water bottles, bottle tops, metal can lining, and more.

BPA exposure is linked to:

You can be exposed to be BPA when it leaches from the product into water or food, particularly when plastic is heated or washed. Infants and children have the highest daily intake of BPA.

Pesticides are another type of environmental toxin we’re regularly exposed to. Pesticides are used to kill certain types of animals that are considered pests. Pesticides can include herbicides, insecticides, and disinfectants.

The U.S. uses more than 4.5 billion pounds of pesticides a year.

Food production also commonly uses pesticides, so your diet may be exposing you to low levels.

Insecticides can contribute to neurological symptoms and may increase the risk of developing diabetes. The research found that people exposed to pesticides had a 70%  higher likelihood of Parkinson’s than people who reported no exposure.

Children may be particularly at risk for ill effects linked to pesticides, likely because they eat more relative to their size and spend time on the ground and in the dirt.

To reduce pesticide exposure, try to eat organic fruits and vegetables, and wash and scrub all you consume. You can also reduce your exposure by growing your own produce.

Finally, another environmental toxin to be particularly aware of are phthalates. Phthalates are chemicals that soften plastic, and they’re in cosmetic bottles, lotions, shampoo, and deodorant. They are gradually being phased out in the U.S. and Europe, however.

To reduce exposure, try to avoid plastics that have the #3 recycling code, and use PVC-free containers. Choose phthalate-free toys and beauty products.

You can’t necessarily avoid environmental toxins altogether, but you can empower yourself with knowledge and information so you can reduce your exposure and choose products accordingly.

Susan Melony is a freelance writer, digital marketer, and entrepreneur based in Kansas City. She often travels while working, and is passionate about the digital nomad lifestyle.