How Has Monosodium Glutamate Made Its Way into American Cuisine? 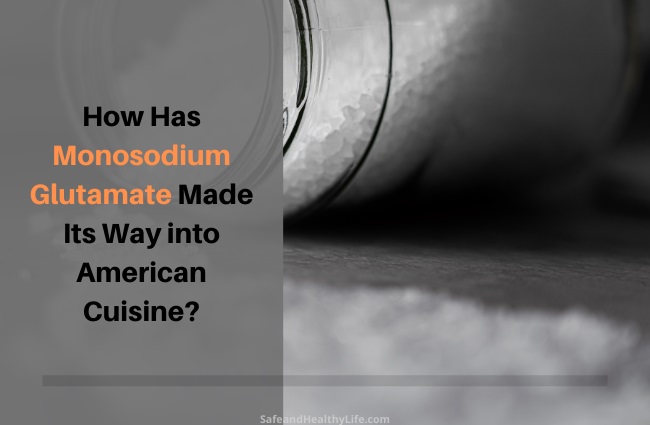 Right from ancient times, the western world has always been fascinated by the eastern civilizations and vice versa. The traveling merchants passed on the cultural, culinary beliefs between the ends.

Due to this, unique products, native to a particular region have reached worldwide, and have been accepted by the people with different cultures and traditions. Monosodium Glutamate is one such product that has made its way from Japan to America.

The chemical composition of the salt is C5H8NO4Na, while, it is chemically named sodium 2-aminopentanedioate. Its most important and basic use is, it acts as a great food additive and flavor enhancer in the food industry. It’s well known for its ability to intensify meaty flavors in sauces, broths, and many more food items.

Monosodium Glutamate is derived from the amino acid glutamate, or glutamic acid, which is one of the most abundant amino acids in nature. Considering its genesis from Japan, glutamate MSG is one of the main ingredients of Asian cuisine.

Monosodium glutamate is naturally found in a number of foods, like tomatoes, meats, cheeses. Nowadays MSG is created by fermenting starch, sugar, beets, sugar cane instead of the extraction of glutamate MSG from seaweed broth. It’s a similar process to that of yogurt or wine.

The Discovery of MSG and Umami flavors, paved its way to the 5th taste, apart from sweet, salty, sour, and bitter. the Japanese professor Ikeda, who invented MSG, described this unique taste as Umami or savory. The “umami” vogue has turned into a massive obsession throughout the world, helping the most misunderstood food additive MSG change its tarnished image worldwide.

If we simplify the scientific definition, Umami is the taste of Glutamate (glutamic acid), Guanylate, or Inosinate. Glutamic acid is a common naturally found amino acid, from vegetables and animal proteins. Guanylate is found in plants, while Inosinate is found in meats. The meaty broth-like savory taste explained in Japanese terms is what we name umami.

Umami is one of the essential basic five tastes, namely, sour, sweet, bitter & salty, which is why detecting savory taste is essential for survival. Umami composition is typically found in foods with high protein content, which is why, after tasting the natural umami flavor, your body detects, that the food contains proteins.

In response to this, your body secrets saliva and digestive juices, in order to help digest these proteins. Thus, umami foods help you with digestion, muscle growth, increased metabolic activities, and much more.

MSG has traveled all the way from Japan to America beginning in the early 20th century when the US began shifting towards industrialized food production.

From the mid-1930s to 1941, America consumed more MSG than the other country besides Japan. MSG in America was a key ingredient in the canned soups and processed foods and restaurants

At the right time, Ikeda’s invention was utilized in Chinese cooking to reinforce broths and vegetarian dishes. After WW2, Americans became more sympathetic towards Chinese immigrants and commenced exploring the U.S.

Chinatowns and tasting Chinese food for the first time. Americans were consuming large quantities of MSG America through canned and frozen foods and in Chinese restaurants.

The ’60s saw a consumer revolt against industrialized foods MSG in America as pesticides, chemicals, and food additives began to draw in suspicion. A letter was published in an American medical journal during the late ’60s by a Chinese-American doctor, which proved to be the catalyst in demeaning MSG in America.

The doctor had experienced numbness at the rear of the neck, gradually radiating to both arms and therefore the back and general weakness with palpitations. This letter sparked an influx of responses from readers claiming vaguely similar symptoms.

MSG was blamed for the side effects, and, thus, The American Food and Drug Administration (FDA), the United Nations, and various government bodies tried investigating MSG and deemed it safe. Though MSG still gets an umami taste, which is actually the essence of MSG, has become a huge MSG American food trend in recent years.

MSG took off within the US within the 1920s and ’30s, more than a few decades after the Japanese scientist Dr. Kikunae Ikeda first discovered glutamate in his Tokyo lab in 1908.

While MSG was an enormous hit with Japanese home cooks at the time, in the US, the most market was industrial cooking; MSG American food companies and restaurants started to put it in soups, frozen dinners, concentrated chicken broth, and lots of other packaged foods to form them taste better.

The ingredient found its way into American home kitchens and restaurants and stayed there for subsequent few decades.

Since 1998, MSG cannot be included within the term “spices and flavorings”. However, the term “natural flavor” is employed by the food industry for glutamic acid, the reason being, it is chemically almost like MSG but only lacks the sodium ion.

The Food and Drug Administration (FDA) doesn’t require disclosure of components and amounts of “natural flavor.”

The FDA considers labels like “no MSG” or “no added MSG” misleading if the food has ingredients that are sources of free glutamate, like hydrolyzed protein.

In 1993, it proposed adding “contains glutamate” to the common names of certain hydrolyzed proteins with substantial amounts of glutamate.

FASEB’s report concluded that MSG is safe. The FASEB report identifies some short-term, transient, and generally mild symptoms, like numbness, flushing, tingling, palpitations, and drowsiness which may occur in some sensitive individuals who consume 3 grams or more of MSG without food.

However, a nominal serving of a food with added MSG contains about 0.5 grams of MSG. Consuming quite 3 grams of MSG without food on just one occasion is unlikely.

This is Sharon Allen. I am working as a Food Analyst & a professional blogger. I love to write on topics about Health Issues, Fitness, Foods, and beverages to help people prevent health issues and stay healthy all their life.