Having the Right Influence on Your Puppy’s Behaviour

The dog has been closely associated with man for more than 10,000 years. Selective breeding has produced a large variety of breeds and there are considerable differences between the temperament of the dog that has been bred for a specific function such as hunting and those that have evolved through the sheer whim of the dog breeder, such as some of the miniature breeds.

Regardless of breed, the temperament of all young puppies can be influenced by environmental factors during gestation and up to the first four months of life.

There is evidence in some species that gentle handling of the pregnant animal in a stable environment results in docile offspring tolerant of sudden changes in the surroundings. It is probably wise to make sure that the pregnant bitch’s environment is kept as stable as possible and that she is gradually introduced to the new quarters prepared for whelping. 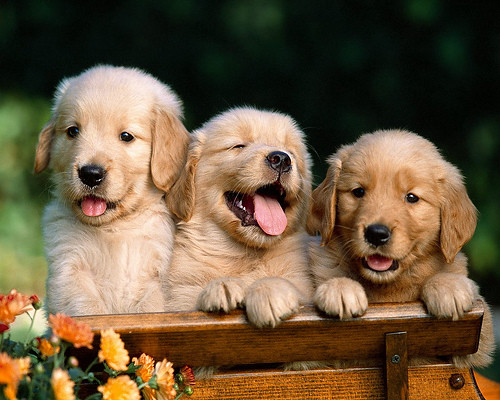 Whelping should be as quiet and undisturbed by the presence of humans as possible. Minimum handling of the mother and puppy ensures that the basic bond between mother and puppy is not disturbed. Excessive fondling of the bitch or the puppies should be avoided. The over-indulged bitch that keeps leaving the whelping box and running to the owners may refuse to suckle the puppies. Early disruption of the mother-puppy bonding can lead to serious behavioural problems in the puppy late in life.

Normally the bitch is reluctant to leave the litter for the first week. Slowly she begins to spend more time away from the puppies in between feeding times and by the third week, the puppies begin to follow her outside the whelping box. The bitch gradually encourages more independent behaviour by leaving the litter for longer and longer periods and by punishing any puppy that attempts to suckle between the established feeding times. Read more: Feeding guidelines for dogs.

During their first six weeks, the puppies become more dependent on their own company and begin playing, having mock battles and hunting together as a pack. Some mothers may become quite aggressive toward the puppies at this time and begin to compete with them for food. If such behavioural traits in the bitch become obvious it is best to wean the puppies as quickly as possible to avoid transferring these emotional instabilities to the whole litter.

After weaning the attitude of the bitch can change dramatically. Instead of rejecting the offspring the mother often starts to play and encourages the puppy to defend its territory. Sometimes such a close relationship with the mother over a period of months may result in a puppy whose individual personality has been suppressed. It may be difficult to train, and may not make a very good pet.

Between four and 12 the puppy not only interacts with its littermates but becomes interested inhuman company. Experiences during these eight weeks of socialisation can influence the future temperament of the puppy. Without contact with humans, it may always be wild and unapproachable and be a poor house pet.

Puppies taken away from their littermates before four weeks are liable to become asocial to other dogs. They may be over-protective, savage and may be unsuccessful breeders.

The ideal time to wean a puppy is from six to 10 weeks. At this time, it is capable of fitting into a new environment comprising of both humans and other dogs. It is important that for the next few months it is not deprived of further learning experiences with other humans and dogs.

Well adapted puppies at weaning may lose some of their social graces if subsequently kept isolated from either humans or other dogs.

The new puppy must quickly learn its role within its new family. It should not be allowed to become too aggressive and try to take over as leader of the pack nor should it be encouraged to be too dependent and submissive. Allow even toy breeds to be dogs and not substitutes for human babies.