What Makes a Peptide Different From a Protein? 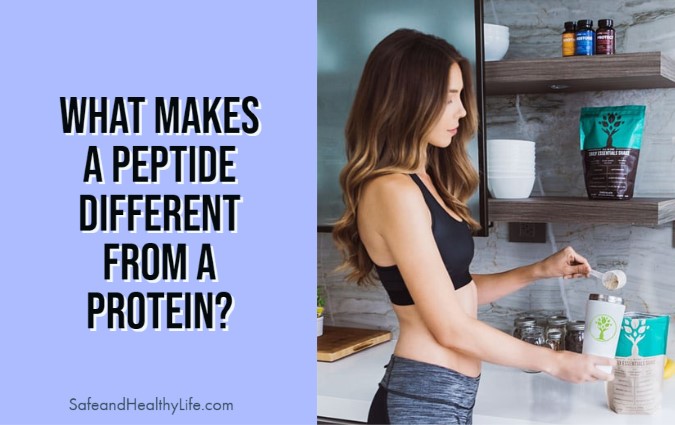 You don’t have to be a biologist or nutritionist to appreciate these building blocks of life. Anybody can learn valuable knowledge by knowing how these fascinating chains of organic compounds operate.

Let’s look at how these two essential molecules are used to perform vital processes and how they differ in function.

Before we dive into the difference between these molecules, let’s look at the shared ingredients that go into making these molecules. To put it simply, amino acids are the raw materials that are used to form chains.

While there are many other elements that these organic compounds can work into their form, they are mainly composed of a small chain of carbon, oxygen, nitrogen, and hydrogen with a smaller chain attached to the side. This side chain can consist of myriad ingredients based on the intended function of the amino acid.

These compounds are linked together to take on a specific function and become either a long or short chain. The best way to keep a ready supply of these compounds within your body is by eating a healthy diet that includes the materials needed to create new ones.

These short-chained molecules are made of between two and fifty amino acids. Any cell that you can think of within the human body has plenty of these peptide molecules inside it.

Many peptides have been researched by scientists recently and these studies have found that many of the researched peptides can accelerate many healing processes in the body.

Cells use them to perform tasks that keep us alive and healthy. Their small size allows them to be quickly synthesized, which is helpful for when they must be used for complex processes that require several stages.

The range of what they can do is both astounding and hard to define. Some can act as a hormone regulating systems and others can be used to help regulate different processes that promote physiological balance in the body.

They can perform certain jobs that proteins can’t thanks to their small form. Larger molecules are often difficult to move through the confined tubules of cells, but these short-chained molecules are compact enough to travel unhindered.

This is why they are so ubiquitous throughout the many types of cells in the human body. Every tissue relies on them to do things like transport or alter molecules. Another advantage is their easily modifiable nature. When a certain one is no longer needed, then it’s easy for cells to either break apart or repurpose them.

A combination of several of these molecules that have been linked together is referred to as polypeptides. These are connected through a covalent bond, which allows them to be altered without expending too much energy.

It wasn’t until 1965 that the first synthetic version of these types of molecules was created. This substance was insulin, which is now used to treat a number of ailments all around the world.

The creation of this substance immediately had an effect on the realm of healthcare. Many conditions that were impossible to treat could now be managed through the use of insulin.

This was just the start of a new boom in synthesizing these kinds of substances. After manufactured insulin proved how powerful these short chains of amino acids are, then it became apparent that synthesis would be a huge focus of the field of biochemistry.

Because of their importance in so many different functions, they could be used to interact with everything from digestion to sexual intimacy.

An amino acid chain that has fifty or more molecules is identified as a protein. Proteins are an integral part of the human body, and in more ways than one.

It’s common to hear people associate a high-protein diet with strong muscles; while this isn’t incorrect it is vastly understating the full power of proteins. It’s true that proteins give the body structure, but they also take on jobs such as signaling and creating new molecules.

A protein can be structured to pick up molecules and transport them to another place. This can be done extremely quickly thanks to their large size and complex shape. Proteins can also take information from DNA and use it to form molecules that are needed to build the body.

Proteins are considerably larger than peptides which makes them capable of completing unique functions. More varied amino acid chains mean that proteins can interact with molecules on a deeper level.

Proteins require a higher variance and amount of resources to be built, which is why they are associated with organisms that are highly evolved.

For example, in order to continue the intense level of energy that every human utilizes, it’s necessary to have an extended list of specific proteins. Peptides can take care of simple tasks, but many of the processes that have allowed humans to climb to the top of the food chain are based on the power of proteins.

Another factor that plays into the ability of proteins to help humans thrive in the fact that proteins can be dangerous if not tempered by fats and carbohydrates. For this reason, carnivorous animals are not able to fully utilize proteins in their body– but humans, which enjoy one of the most varied diets of any creature on the planet, are at less risk of coming to harm.

Scientists have been aware of the existence of proteins since the eighteenth century. They were able to identify its presence in meat and other biological substances, which led them to the conclusion that proteins were essential for keeping the body structured.

It wasn’t until the early twentieth century that researchers were able to connect proteins with more complex tasks; thus, showing that proteins were important for much more than just building muscle.

Overall, there are thousands of protein combinations that are recorded in the human genome which are all vital to daily existence.

Victoria Wilson writes about health science in her free time. She holds a Bachelor’s degree in chemistry from the University of North Carolina.