3 Unique Mushrooms to Add To Your Diet 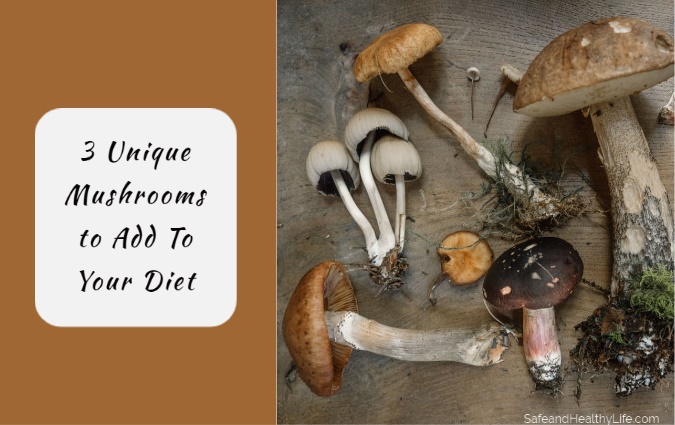 We’re all used to seeing button mushrooms in the grocery store, or adding a can of sliced mushrooms to a recipe.

Mushrooms contribute to taste and texture to many meals, and sometimes, as in the case of stuffed portobello mushrooms, they are the meal.

But beyond the common varieties such as button mushrooms or portobellos, there are many others that are worth trying. Cremini mushrooms can often be found in the produce aisle, along with oyster mushrooms and porcini mushrooms.

Those who are mushroom aficionados may have tried shiitakes or chanterelles or opted for the health benefits found in organic reishi mushroom powder. There are even medicinal mushrooms for dogs.

And then there are these 3 unique mushrooms that are worth looking for, whether you find them in the store, forage for them in the wild, or purchase them as a powder or supplement.

Those who forage for mushrooms in the wild would do well to look for this interesting fungus, so named because the colors and scales on its top resemble the patterns of pheasant feathers.

In the United States, the pheasant tail or pheasant back is found east of the Rocky Mountains, where it fruits in the spring and sometimes in the fall.

While clinical studies have not documented specific health benefits of the pheasant tail. It does have the same advantages of other mushrooms, including the presence of fiber and vitamins, and properties such as antioxidant, anti-inflammatory, and is good for heart health.

The pheasant tail also plays an important role in the forest ecosystem by decomposing wood. And, you can even make paper with pheasant tail mushrooms.

The lobster mushroom may be the most unique among all fungi, and not just for its vibrant red color. What makes it special is that it’s actually a white mushroom with a parasite on it that forms an orange or red crust.

The host mushroom is usually the russula mushroom, also called the stubby brittlegill, which is covered by a parasite that distorts it.

The parasite creates a crust that is yellow-orange to reddish-orange when the mushroom is young and fresh and then turns to a magenta or purple blotchy color when it ages.

The surface of the mushroom also gets a rough or pimply texture, while the inside remains white and smooth.

And what’s even more interesting about lobster mushrooms is that they are high in fatty acids and amino acids compared to their host, the russula mushroom, which is actually bitter.

In fact, scientific evidence shows that the parasite doesn’t just coat the host mushroom – it alters the biochemistry to make it edible.

Besides the common health benefits of mushrooms, the lobster is a good source of Vitamin D, iron, and calcium.

The cordyceps mushroom is another noteworthy fungus because it’s found on the larvae of caterpillars in Japan.

This variety of mushroom was used in ancient Chinese medicine to treat many medical conditions, including fatigue, kidney disease, and low sex drive. It’s also known for its brain-boosting properties.

Modern medical research and anecdotal evidence show that cordyceps may be able to increase your VO2 max, resulting in a better workout. It can also help diabetics by mimicking insulin, and it has antioxidant and cancer-fighting properties.

If you think you have to search for caterpillar larvae, don’t worry. It’s best purchased as cordyceps mushroom powder, including an affordable, lab-created version that is used in most supplements.

Any variety of mushrooms is a welcome addition to recipes such as pizza or pasta, fried onto burgers, used as a meat substitute, or cooked into soup.

Those who are not as fond of the flavor or texture can reap the health benefits by steeping mushrooms in tea.

And it’s worth expanding your repertoire to some less common mushrooms, including the three healthy fungi we have highlighted here. It’s time to add mushrooms to your daily routine.

As you learn more about growing this delicious and nutritious food, you can try more advanced cultivation techniques, such as monotube tek and log cultivation, to grow a steady supply of mushrooms for yourself.

Mushroom Health Guide was developed by a combination of pharmacists with over 15 years of experience that has ventured into the realm of natural foods, supplements, and lifestyle modifications for the sole benefit of improving our health and placing an effort in preventing disease using this information.

The pure benefits of mushrooms and the medicinal properties they possess became a focus after realizing their role in preventing major disease and illness.

We look forward to contributing and discussing more beneficial knowledge about medicinal mushrooms, new studies, health benefits, and the most current breakthroughs that we may discover about this important topic.