How An Electric Bike Can Help You Stay In Shape 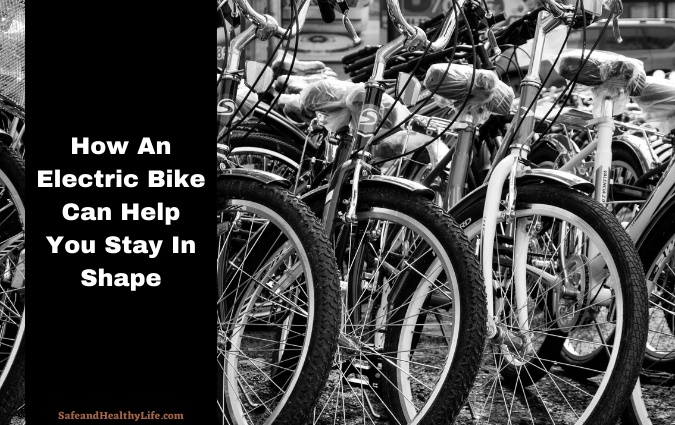 As the modern world promises more convenience than ever before, the need to find fulfilling and rewarding exercise is more important than ever.

A cyclist will always tell you that the benefits of riding a bike are two-fold – a great way to squeeze a workout into your daily routine while offering more independence.

For many, however, cycling to work is as daunting as running a marathon and presents more challenges than it’s worth.

The solution might be found in electric bikes – an easier and more accessible way to travel. E-bikes saw a surge in popularity around Europe in the past decade and are quickly taking the rest of the world by storm.

It’s estimated that e-bike sales are expected to see massive growth of 7.9% and upwards of 130 million sales worldwide between now and 2023.

The rising trend in e-bike sales leads to advances in the technology behind the motors and mechanics of the bikes. This means that electric bikes will only improve in the future.

Already we are seeing more and more powerful versions being released on the market each year, such as the ‘Eunorau Specter S Fat Tire Electric Bike.’

You might still be wondering, is an electric bike really a bike at all and how does it actually work?

What is an electric bike and how does it differ from a regular pushbike?

An electric bike operates in very much the same way as a regular bike but with added components that offer assistance. Many see electric bikes as a cheat to avoid the real effort of a traditional cycle.

But the increasingly popular form of transport only works when the user pedals. An electric motor activates when the bike is in motion, only when the pedals are being turned.

You can’t simply sit on and go, meaning you’ll still get a worthwhile sweat on.

So, if you’re looking for a way to get into cycling but need that extra little push, an electric bike may be the answer.

How can an electric bike improve my fitness?

E-bikes offer a more eco-friendly form of transport compared to cars and motorbikes. Not only are they more sustainable for the planet but for your wallet too.

Besides reducing your environmental impact and saving money, you’re probably wondering how an e-bike can help you get in shape.

Cycling remains one of the most effective forms of cardio. From improved heart health to enhanced muscle mass, the benefits of biking are almost endless. If that wasn’t enough of a reason to jump on the bike, cycling has also been linked to numerous mental health perks.

An hour on a bike can improve focus and offers a relaxing form of exercise, reducing stress and anxiety. Electric bikes make it even easier to incorporate this level of exercise into your schedule.

Here are some of the other reasons why an electric bike is a great way to shed pounds and feel good doing it.

For those who usually cycle to work and back, the journey can be more exhausting than it’s worth. There’s nothing worse than turning up to work after a particularly grueling ride, drenched in sweat and forced to get on with the day.

Electric bikes were created as a solution to this problem and to make cycling more accessible for people who don’t consider themselves world-class athletes (not you of course). It may be less of a workout than a manual pushbike, but that’s sort of the point.

Electric bikes can also encourage people with injuries or those in an older age bracket to get out on the road and stay active.

When the ride is easier, you can cycle for longer distances, and travel further to new places you wouldn’t have even considered tackling on a traditional pushbike.

I know I’ve personally been halted by the fear of a steep hill when it comes to jumping on the bike. I could have used the extra push.

E-bikes offer a motorized boost that still requires effort but won’t leave you winded at the end of your ride. This means you develop a better relationship to exercise and are more likely to be active more regularly.

Before you know it, you’ll be taking on increasingly difficult challenges at a rate you’re comfortable with. Tremendous progress will be made all because an e-bike gave you that confidence boost you needed.

Does this sound familiar: you’re looking to incorporate regular exercise into your routine but after one too many intimidating sessions at the gym you’re ready to give up?

You’ve tried everything else from cycling, running, swimming, and even yoga but nothing quite cuts it. Electric bikes are a fun way to get out there without having to dread the inevitable hills or relentless winds.

At the end of the day, you want the exercise to be fun and to hopefully serve dual functions. E-bikes offer a workout that you’re in control of and a great way to zip around the city.

There’s a wide range of choices for your next e-bike, from electric mountain bikes for the mountaineers out there to folding e-bikes for the minimalists with little storage space to spare. Even bikes designed to carry more cargo with heavyweight frames are ideal for bigger shopping trips. Choose the best e-bike that’s right for you.

Overall, electric bikes can save you money, improve your health and fitness, lessen your carbon footprint and provide an opportunity to get where you need to be with increased convenience.

They can help you start a fitness journey, or restart one if you’ve struggled with an injury that took you off the pushbike in the first place.

Most importantly, all signs point to e-bikes being the future of transport and as cities get more cramped and overpopulated, the technology will only improve.

So, what are you waiting for? Get out there and get cycling!

Trevor Fenner is the founder and owner of Electric Bike Paradise, a one-stop shop for all your electric bicycle needs. He has been selling bicycles, electric bikes, and electric scooters online since 2010 and eventually established Electric Bike Paradise in late 2013 when he happened to meet a seller from Craigslist that introduced him to electric bikes. Ever since Trevor spent time searching for electric bikes online but couldn’t find a single website that offers a wide selection of bikes and informational articles. That is why he decided to start a website where everyone can shop conveniently, browse buying guides, and read educational posts. The website is called ElectricBikeParadise.com.