Increase in Children Seeing Doctors Due to Air Pollution 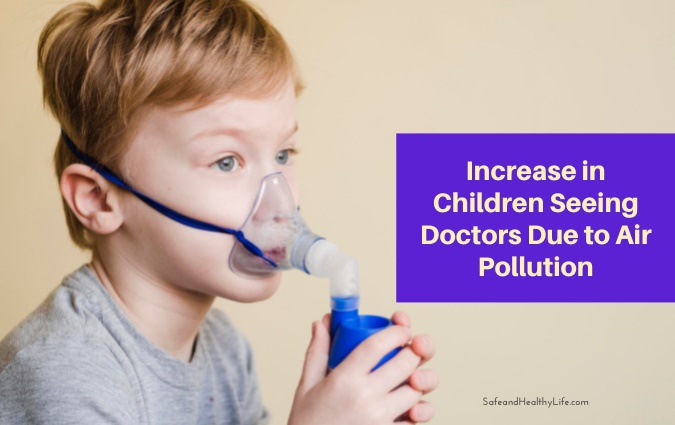 A study conducted in south London over a period of over five years discovered an increase in the number of children with asthma, aggravated asthma, and other respiratory diseases. There was also an increase in prescriptions for inhalers for all age groups.

Data they collected indicated that asthma and respiratory child consultations increased by at least 7.5% every time particle pollution levels increased by around 9µg/m3. These numbers were collected from Lambeth, which is located in south London.

The study also collected data on NO2 or nitrogen dioxide. Average levels for this high pollutant gas were 51µg/m3. So, when this number increases to around 22µg/m3, GPs are expected to find an increase of at least 6% in consultations.

Lead researcher Mark Ashworth said the big increase is a significant factor that they have not seen before.

One of the group’s realisations after carrying out the study is the fact that a huge percentage of the consultations were among children. GP visits for child consultations on asthma and other respiratory problems have become more frequent, and this includes extra visits.

However, the group collected data only for weekday GP visits – Monday through Friday. It also included consultations during surgery hours.

The study did not focus on GP visits that took place in the evenings or over the weekend, so data pertaining to these are not included in the study.

One of the reasons that the group pushed through with the study is the death of nine-year-old Ella Kissi-Debrah. Ella died in 2013 after a severe bout of asthma.

Ella’s death opened the eyes of the entire UK community, including the government. Her death was quite controversial as her mother, Rosamund, was unaware the area they were living in – near South Circular Road – is highly polluted.

They did not know enough about air pollution and its effects on human health after constant exposure to toxic air.

An inquest was ordered on Ella’s death and in December 2020, the coroner announced his verdict: the nine-year-old died because of air pollution or toxic air. Her death was the first of its kind in the UK, which is partly the reason why it drew various reactions.

Ella walked to school every day and passed by several highly polluted areas on the South Circular Road side of London. Thus, she was exposed to high levels of nitrogen oxides or NOx.

NOx or nitrogen oxide is primarily emitted by road transport, particularly diesel vehicles. This gas is highly toxic as it combines NO or nitric oxide and NO2 or nitrogen dioxide.

When NOx reacts with certain compounds, it produces smog and acid rain, powerful elements that wreak havoc on the environment. It also contributes to the formation of ground-level ozone.

The most devastating effects of nitrogen oxide pollution are on human health. The impacts can be life-changing. Low-level exposure can result in headaches, corroded teeth, difficulty in breathing, lung-related issues, and asthma (or aggravated asthma for those who already have it). Exposed individuals can also develop emphysema or bronchitis.

As nitrogen oxides are road transport emissions, the UK government has taken extra measures to create programs that tackle NOx emissions. One such incident is the Dieselgate diesel emissions scandal, which broke in the US in 2015.

The diesel emissions scandal saw German carmaker Volkswagen admitting to allegations by the US Environmental Protection Agency (EPA) and the California Resources Board that they fitted their diesel vehicles in the United States with defeat devices intended to cheat on emissions tests. VW initially denied the accusations but later on admitted to knowing about the devices.

Defeat devices are created to detect when a vehicle goes into testing for regulatory emissions. Once they do, they automatically and illegally reduce emissions levels so these stay within the limits set by the World Health Organization.

However, once the vehicles are driven in real-world driving conditions, they emit high levels of nitrogen oxides, which are in excess of the legal limits set by the EU and WHO. Thus, the vehicles are heavy pollutants.

Mercedes-Benz, another German manufacturer, was the second carmaker to be caught allegedly using defeat devices. Over the years, the carmaker has maintained that the allegations against them are baseless.

Nevertheless, thousands upon thousands of affected Mercedes car owners have already filed Mercedes emissions claims against the company for the financial, health-related, and environmental stress that they caused.

You, too, can file a claim against Mercedes for diesel emissions. All you have to do is find a panel of emissions solicitors, such as the ones at ClaimExperts.co.uk, who are professionally trained, regulated, and highly experienced. Work with them and increase your chances of winning your Mercedes emissions claim. Visit their website now.

Barbara is a Senior Support Manager at Emissions.co.uk. Emissions.co.uk specializes in bringing claims in the UK on behalf of those who have purchased vehicles from these manufacturers, whose cars breached harmful NOx emissions standards. They go against a number of car manufacturers who have lied about their pollution and emissions, in a scandal that is now known as dieselgate.