What Is Gaslighting? 15 Toxic Signs 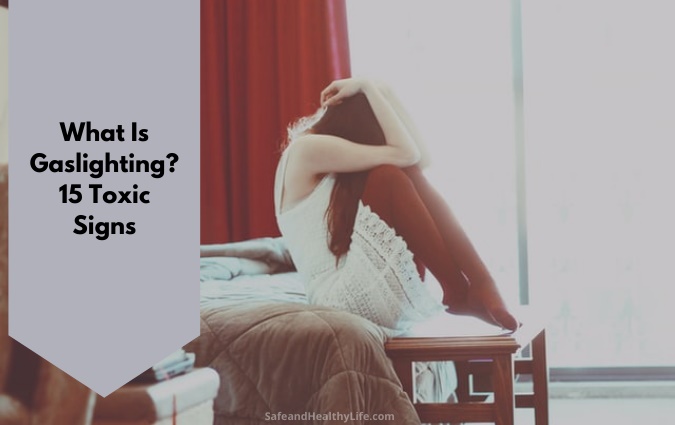 Gaslighting is an unfortunate form of psychological manipulation in romantic relationships.

It can drive people to question their sanity or even their reality. It’s characterized by one person repeatedly manipulating the other in a relationship.

It’s definitely as bad as it sounds – the person is exerting power in the relationship to try and gain control over their partner or inflict some sort of emotional damage.

So, why would someone resort to such disturbing behavior?

If they have low self-esteem, it might be a twisted way to make themselves feel better. In other cases, research has shown that some people really just enjoy the feeling of control they get from gaslighting another person.

Regardless of the reason, gaslighting is never okay, and the signs are generally the same.

Here are 15 toxic signs of gaslighting to look out for:

A big part of gaslighting is trying to challenge someone’s perception of events or sense of reality. Gaslighters constantly alter the truth to frame things in their favor. Every lie, no matter how small, makes you question yourself, and they’ll keep it up regardless of whether you start to catch on.

2. Denying Even if You Have Proof

If you get caught in a lie by your partner, you immediately come clean, right? Gaslighters do the opposite. They will deny lying, even if there’s proof, and even double-down on their “innocence.” It makes you question whether or not you’re making things up.

If you’re constantly making excuses for your partner to friends and family, it’s probably a bad sign. (Not to mention, exhausting.) You continue to do it against your better judgment, which can create distance from your loved ones.

The reason? The gaslighter’s combative behavior leads to so much conflict that your inner circle is getting involved, causing you to defend them. (Which, unfortunately, works to the gaslighter’s benefit.)

As an ultimate form of manipulation, gaslighters learn what is near and dear to your heart and use it against you. For example, if you appreciate support in a relationship, they might say something like, “I’m the only one who understands you.” They will also tear down your confidence and self-worth by questioning things you like about yourself.

5. They Use Your Personal Relationships Against You

Gaslighters don’t want anyone outside of the relationship to challenge their control. So, what do they do?

6. They Tell You You’re Being Crazy

Gaslighters love to make you feel stupid or silly for how you feel. Even if you have a good reason for a certain reaction, they’ll convince you that you’re being crazy. This constant manipulation might lead to you letting things go more often, even when you shouldn’t, just to avoid coming off as “overly sensitive.”

Not only do gaslighters constantly lie, but they accuse you of lying. This causes you to defend yourself, which shifts the attention from their behavior to yours, even when you’ve done nothing wrong.

8. Words and Actions Don’t Match Up

The old adage, “actions speak louder than words” has never been more true. A gaslighter may tell you they have your best interests in mind, but their actions say otherwise.

9. They Tell You How You’re Supposed to Feel

If you’re being gaslighted, the person will dismiss your feelings and tell you how you “should” feel. They’ll say things such as, “You should be happy I did that for you,” or “You should be more grateful.” This can also make you question your reaction to things.

If you’re constantly apologizing (even when you’ve done nothing wrong), you’re likely being gaslighted. You’d rather say sorry to keep the peace than have them attack your character again, which is both unhealthy and personally draining.

11. You “Walk on Eggshells” Around Them

Do you feel like you’re always walking around on eggshells, afraid of upsetting your partner? Not only is it stressful, but it’s also a sign of gaslighting. They’ve manipulated and worn you down so much that your goal becomes keeping them happy at all costs. You prioritize their feelings over your own, mainly because they’ll criticize you for having them.

12. They Add in Positive Reinforcement to Confuse You

They know they can’t act in control 100% of the time, so someone who is gaslighting you will throw in some nice behavior from time to time. One loving act could be enough to make you think they “aren’t so bad.” If it’s rare to see the good side of your partner, it’s probably time to rethink the relationship.

13. They Align People Against You

Gaslighters will lie about your friends and family to make you believe they’ve turned against you. They might say, “My sister agrees that you overreacted,” or “My friends couldn’t believe you acted like that.” Whatever it is, it’s likely not true. The more people they have “on their side,” the more you question your own actions, which is exactly what the gaslighter wants.

14. You Feel Isolated From Your Former Life

Someone who uses gaslighting manipulation wants you totally isolated from your former life. Why? They need total control—and they can’t have it if you’re influenced by outside relationships.

Constant manipulation can take a toll on your physical and emotional well-being. If you’re feeling anxious, defeated, or exhausted, it’s time to end the relationship. Trust your gut — if something doesn’t feel right, it’s probably not.

So, What if You Are Being Gaslighted in Your Relationship?

One of the first things you can do is reach out to friends and family for advice. If you think it’s all in your head, they will be quick to help you realize that you’re a victim of gaslighting. While there are times people try to work through it, it’s not easy.

Gaslighting is incredibly unhealthy and damaging to a relationship, and the best option is to end it. At the end of the day, it’s important that you focus on yourself and practice self-care. Remember, a gaslighter might try to control you, but they’ll never be able to change who you are.