May 18, 2022Written by Safe and Healthy Life Expert 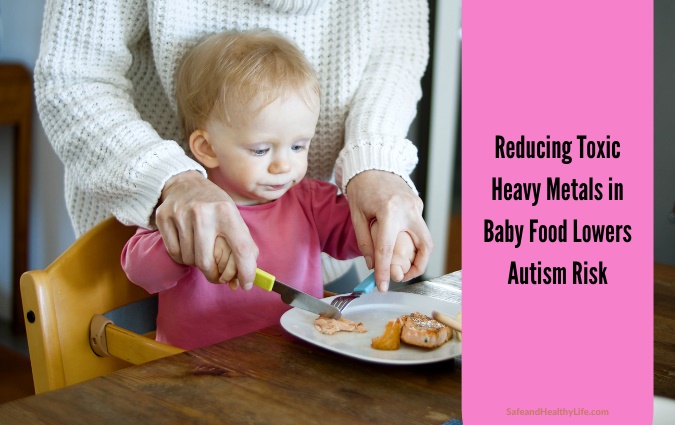 A February 2021 congressional report from the Subcommittee on Economic and Consumer Policy uncovered alarming facts concerning the contents of U.S. infant nutrition products. The results indicate the presence of excessive amounts of toxic heavy metals and substandard internal safety policies.

Heavy metals are naturally occurring elements that have a significant role in nutrition. Calcium, iron, and zinc are required for proper development in adequate amounts. Conversely, unsafe elements like mercury, cadmium, lead and inorganic arsenic have no safe exposure level and are known neurotoxins associated with neurodevelopmental disabilities.

A consensus hasn’t been reached yet regarding the precise causes of autism spectrum disorders (ASD). Multiple factors are likely involved, including environmental exposure and genetics. Mounting evidence shows that children diagnosed with ASD have higher counts of toxic heavy metals in their system. The staggering amounts of these contaminants in baby food products represent a potential exposure risk.

Since infants absorb more nutrients and have underdeveloped filtering and immune systems, they’re highly susceptible to the adverse effects of neurotoxins. These harmful heavy metals accumulate in bones and tissues and steadily lead to deficiencies in neurological development.

The Subcommittee’s report was received with lukewarm reactions from the baby food industry. Not only did 3 out of the 7 companies involved in the investigation refuse to cooperate, product recalls following publication was low. This limited response from the industry attracted the FDA’s attention, which initiated its “Closer to Zero” action plan. Congressman Raja Krishnamoorthi proposed the Baby Food Safety Act of 2021 to restrict toxic metals in baby food.

A coalition of 24 Attorneys General echoes the pending bill’s stipulations. In a petition addressed to the FDA, the coalition notes that the Agency should impose stricter regulations and speed up its action plan’s timeline. The most common demands reflect the need for manufacturers to ensure final product safety and improve internal regulations.

Breastfeeding Is Vital During the First Year

The most crucial aspect of a baby’s proper development is sufficient breastfeeding. Recommended for a minimum of 6 months and up to a year, pediatricians note that the nutritional value of mother’s milk is unmatched.

Besides the essential proteins, fats, vitamins, and minerals that encourage growth, breastfeeding also bolsters the immune system and reduces the likelihood of chronic diseases and infections. During this nurturing period, mothers should be mindful of their intake. Avoiding products high in toxic heavy metals limits exposure to their infants.

Rice Should Be Replaced

Rice is a notoriously absorbent crop with an inorganic arsenic count up to 20 times higher than other cereals. Derived products such as rice flour aren’t any safer. Even if sushi and basmati rice are seen as safer substitutes, rice as an ingredient should be used sparingly.

Fish and various seafood are highly nutritious options when transitioning to solids. Unfortunately, some fish have a high mercury concentration and should not be included in a baby’s diet. Species that should be avoided include mainly predatory types like a shark, marlin, swordfish, bigeye tuna, and king mackerel.

The non-profit organization Healthy Babies Bright Futures was instrumental in bringing the toxic contamination crisis to the public’s attention. They provide a few tips on reducing unsafe metal levels in toddlers’ diets.