10 Most Common Causes of Tinnitus 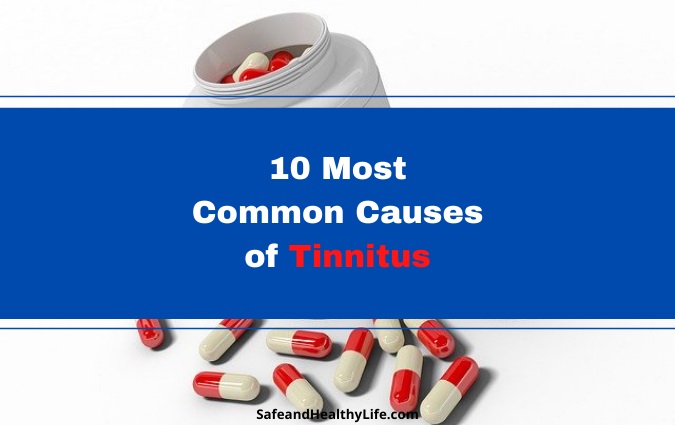 Tinnitus is a condition that is very common. It affects up to 20% of the population and has been thoroughly studied as a result of hearing loss and also as an independent condition.

Tinnitus is commonly known as a noise which is persistent or intermittent and can only be heard by the person experiencing it.

This noise can come in any number of forms, but some of the most common ways that people describe it are as a buzzing, ringing, or pulsing noise.

While there is technically no cure for tinnitus, there are many ways in which it can be treated.

Visiting an audiologist in order to receive an initial diagnosis and treatment plan is recommended.

However, there are also many other treatments, such as holistic supplements, which have proven to be effective in combating tinnitus.

Tinnitus can be an extremely disruptive experience. Especially if it is persistent, tinnitus can essentially serve to take over one’s life.

It can increase stress exponentially due to many factors. For example, tinnitus may make it difficult to interact with other people because it’s difficult to hear them or focus on what they’re saying.

Moreover, tinnitus can cause stress simply because the person experiencing it doesn’t know if and when it will stop.

Additionally, tinnitus can make it a challenge to focus on daily tasks and activities, which can not only be stressful but can also be disruptive to one’s overall productivity.

Because tinnitus can be such a debilitating condition, it has been studied at length. While there is still some mystery surrounding tinnitus, it has become clear that there are several clear-cut reasons why people may be experiencing it.

This article will cover the 10 main causes of tinnitus and discuss why you may be dealing with this condition.

What Are the Causes of Tinnitus?

Because tinnitus is so common, it’s not unexpected that it has many different causes. Some of these causes are simple and can actually be corrected quite easily.

However, some are more complex and may require lifelong treatment through the use of hearing aids or other interventions.

Some of the most common causes of tinnitus are as follows:

There are many different causes of tinnitus. From exposure to loud noises to a buildup of earwax, there seems to be no limit to the number of things that can result in the characteristic ringing of the ears.

However, if you are experiencing tinnitus, remember that there is hope for recovery. While there is no direct cure for tinnitus, speaking with a specialized audiologist or utilizing various other treatments, such as naturopathic supplements, can make a significant difference. Make sure you know the ingredients in your tinnitus medication.

If you or someone you care about is experiencing tinnitus, be sure not to delay in getting help. There are many different treatments available that can help you to gain control over your hearing and help you to refocus on the things that truly matter.

Colleen is a seasoned writer based out of Denver, Colorado with experience creating content for medical, finance, entertainment, B2B, and wellness organizations. She received her Master’s degree in English from the University at Albany and currently works for Peaks Digital Marketing.