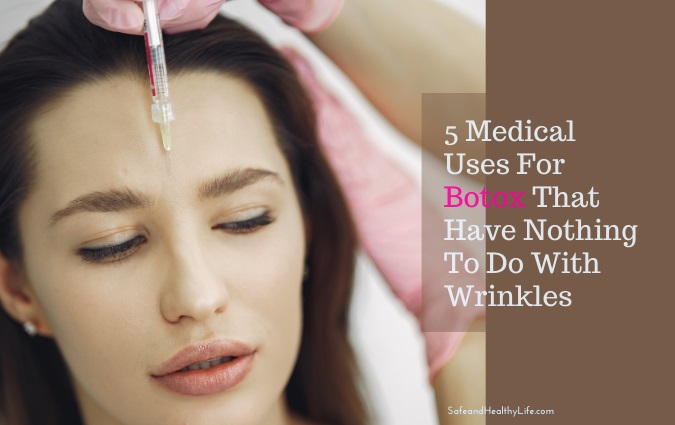 You’ve probably heard of Botox. Most people think of it as a safe and natural beautifying treatment.

Botox is so much more than that, though. We’re going to look at five ways Botox can be used to help manage serious medical conditions – all of them non-cosmetic.

Keep in mind that while Botox is exceptionally safe, that’s only true when prescribed and used by a qualified medical professional. In the hands of amateurs, Botox can be extremely dangerous.

What Botox Actually Is

Botox is the brand name for an injectable form of the botulinum toxin. This toxin stops nerves from communicating with muscles, causing those muscles to become flaccid.

That means the advantages of using Botox go far beyond simple cosmetic treatments. Botox is extremely effective at what it does, safe to use, and inexpensive to produce. Any time paralyzing muscles can be useful, so too can using Botox.

Blepharospasms are the medical term for eyelid spasms. As you can imagine (and you’ll see this trend throughout this piece), Botox is particularly good at dealing with spasms, which are involuntary muscle movements.

When muscles are paralyzed, they can’t spasm. Botox can be injected very selectively, only paralyzing small regions. This means it can effectively stop eyelid spasms without impairing vision.

Specifically, Botox is useful for temporarily treating urge incontinence – it’s not chosen as a first resort because there are some potential side effects, specifically urinary retention.

You’ll note that the treatment is temporary – this is true of all Botox treatments, as eventually, the toxin will be eliminated by the body.

Depending on where the Botox is injected (and what is being treated), you may need reapplication from every few months to once or twice a year.

Given what we’ve discussed about Botox so far, you may be surprised to learn that it can be used to treat migraines – after all, as far as we know, muscle spasms aren’t the root cause of migraines.

Consequently, Allergan (the company that manufactures Botox) started looking into whether or not it could be used to curb excessive sweating.

As it turns out, it can, and it’s been used in some cases to curb underarm sweating, for which it is FDA-approved.

While it’s only FDA-approved for underarm sweating, some patients have used it in order to reduce sweating on their palms and feet.

Given that this is not an FDA-approved use of the drug, it’s especially important to consult with a number of medical professionals before pursuing this option.

Here’s a use of Botox that’s totally out there – curing depression. Take this with a BIG grain of salt – this is not an FDA-approved use of Botox, and it’s simply something that Allergan is trialing right now.

You should also know that they’re not “curing depression” by getting rid of unsightly wrinkles – it’s something much more interesting:

Without getting into all of the details (most of which you can find in this study), the basic premise is simple – our facial expressions feed our emotions, and by using Botox to freeze frown muscles, scientists speculate they may be able to alleviate depression.

The (very limited) studies that have been conducted so far prove promising, so you can expect to know more in the near(ish) future.

Christie Simon is a writer based in Canada. She writes articles with a focus on marketing and health-related topics for a variety of businesses. Some of her favorite pieces can be found on the Stem Cell Lift website.