What Are The Common Health Risks Associated With Obesity?

May 12, 2020Written by Safe and Healthy Life Expert 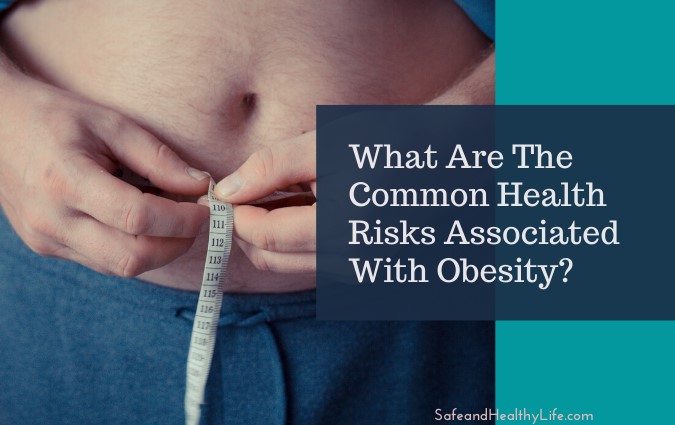 Obesity is not just a cosmetic consideration; it is harmful to one’s health as it is a risk factor for many conditions.

In the United States, roughly 112,000 deaths per year are directly related to obesity, and most of these deaths are in patients with a BMI over 30.

Patients with a BMI of over 40 have a reduced life expectancy. Obesity also increases the risk of developing a number of chronic diseases, including the following:

Insulin is necessary for the transport of blood glucose (sugar) into the cells of muscle and fat (which the body uses for energy). By transporting glucose into cells, insulin keeps the blood glucose levels in the normal range.

Insulin resistance (IR) is the condition whereby there is diminished effectiveness of insulin in transporting glucose (sugar) into cells.

Once the pancreas can no longer keep up with producing high levels of insulin, blood glucose levels begin to rise, resulting in type 2 diabetes, thus insulin resistance is a pre-diabetes condition.

In Type 2 diabetes, your body’s cells aren’t able to respond to insulin as well as they should. In later stages of the disease, your body may also not produce enough insulin.

Hypertension (HTN or HT), also known as high blood pressure (HBP), is a long-term medical condition in which the blood pressure in the arteries is persistently elevated.

Hypertension is common among obese adults. A Norwegian study showed that weight gain tended to increase blood pressure in women more significantly than in men.

A stroke is a sudden interruption in the blood supply of the brain. Most strokes are caused by an abrupt blockage of arteries leading to the brain (ischemic stroke).

Other strokes are caused by bleeding into brain tissue when a blood vessel bursts (hemorrhagic stroke).

Obesity/Overweight are primary risk factors for stroke for men and women of all races.

The degree of obesity, defined by body mass index, waist circumference, or waist-to-hip ratio, was a significant risk factor for ischemic stroke (stroke due to lack of blood flow, rather than due to clotting) regardless of sex or race.

A prospective study found that the risk of developing coronary artery disease increased three to four times in women who had a BMI greater than 29.

A Finnish study showed that for every 1 kilogram (2.2 pounds) increase in body weight, the risk of death from coronary artery disease increased by 1%.

In patients who have already had a heart attack, obesity is associated with an increased likelihood of a second heart attack.

Heart failure, sometimes known as congestive heart failure, occurs when your heart muscle doesn’t pump blood as well as it should.

Certain conditions, such as narrowed arteries in your heart (coronary artery disease) or high blood pressure (hypertension), gradually leave your heart too weak or stiff to fill and pump efficiently (atherosclerosis).

Atherosclerosis refers to the buildup of fats, cholesterol, and other substances in and on your artery walls (plaque), which can restrict blood flow.

The plaque can burst, triggering a blood clot. Although atherosclerosis is often considered a heart problem, it can affect arteries anywhere in your body.

Obesity has been shown to adversely affect the left ventricular structure, as well as systolic and diastolic function.

Obesity may also be associated with breast cancer, particularly in postmenopausal women. Fat tissue is important in the production of estrogen, and prolonged exposure to high levels of estrogen increases the risk of breast cancer.

The most common problem that people have with their gallbladder is gallstones. These are usually made up of cholesterol and form when there is an imbalance between the substances that make up bile.

There are particular risk factors for gallstones, with obesity being one of the main ones.

Being overweight increases the amount of cholesterol in the bile, which increases the risk of gallstones. Around 25% of people who are severely obese (with a body mass index of over 40) have gallstones.

Gout is a disease that affects the joints. It happens when you have too much uric acid in your blood. The extra uric acid can form crystals that deposit in the joints.

Gout is more common in overweight people. The more you weigh, the more likely you are to get gout.  Over the short term, sudden weight changes may lead to a flare-up of gout.

Osteoarthritis (degenerative arthritis) is the most common joint disorder with symptoms in the hands, knees, hips, back, and neck.

Obstructive sleep apnea is a common and serious disorder in which breathing repeatedly stops for 10 seconds or more during sleep. The disorder results in decreased oxygen in the blood and can briefly awaken sleepers throughout the night. Sleep apnea has many different possible causes.

In adults, the most common cause of obstructive sleep apnea is excess weight and obesity, which is associated with the soft tissue of the mouth and throat.

During sleep, when throat and tongue muscles are more relaxed, this soft tissue can cause the airway to become blocked. But many other factors also are associated with the condition in adults.

Each unit increase in BMI is associated with a 14% increased risk of developing sleep apnea, and a 10% weight gain increases the odds of developing moderate or severe obstructive sleep apnea by six times.

As with many chronic diseases, such as diabetes and cardiovascular disease, obesity is mostly preventable with a healthy lifestyle.

Following a balanced, portion-controlled diet, making an effort to move more, finding healthy outlets for stress, and getting enough sleep can make a big difference in weight control.

Carla Smith is the founder of SafeandHealthyLife.com. Her main objective is to provide informative articles, reviews, and analysis of health & fitness topics to her readers that help them to make their life easier and happier. Connect with her on Twitter.